How to use a Whip? 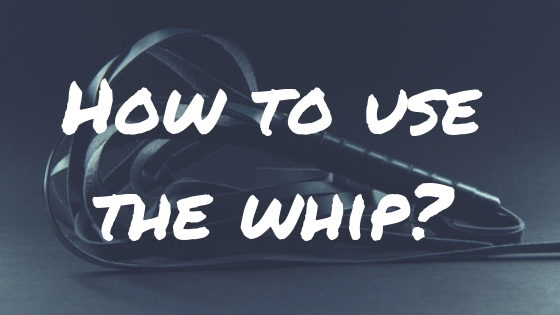 The intoxicating cocktail of submission / domination

"Just a few days ago, I had an orgasm like I had only known it once in my life and it was a long time ago... Too long. First of all, it is important to know that we NEVER tried the experience that will follow since we literally exchanged our usual roles.

That night, with my Apollo at work, I was alone, with my imagination and libido. So I had planned a well-tried scenario and set it up as soon as he came back! When I walked through the door, I set her up comfortably, glass of wine in my hand, and told her that the program was about to begin.

Once swallowed (the wine...), it goes in the shower while I set up my little surprises. Clean but ready to get dirty again, I join him and blindfold him. He is waiting, a few minutes standing in front of me, and already I feel that this evening will be long for each of us.... I then take him out for a 2nd glass of wine, take off his blindfold and let him see the outfit I put on occasionally, hidden by one of his long vests.

I ask him about what he expects from me, while denying him any physical contact with me. Empty glass, I feel sorry for him! He doesn't know yet what to expect.... I deprive him of his sight again, take him to the room, leave him standing, without a reference point, and the game of meaning begins. I have only one goal:

And everything works perfectly, he is on the lookout but lets himself be carried by his senses. After arousing his curiosity with a few kisses and stolen caresses, I lay him down on the bed. Ready to dispose of his body, I guide his hand and let him feel that my thong has given way to my already wet sex. Without delay, I settle down above his face. He soon understood what I was waiting for and offered me his language as a sextoy.

I then take advantage of this gift and wiggle my hips. The vision and feeling of this scene took me a short time to cause me some moans.... But I stop before the orgasm, which I reserve for later. I get up, take his hands, thank him with a languid kiss and guide him on a chair. The wrists tied to the armrests, this time I own it entirely, it is all mine. I make him languish more than ever, turn around, whisper my desires in his ear until the unexpected moment...


After playing with him for more than half an hour, I thought I had definitely convinced him to make me pay for this gap. So I took out our new toy (which was normally intended for me), a swift. I let his straps slide down his chest, thinking I would sharpen his desire to use it on me. But the gentleman did not agree, believing that he was not satisfied... When I asked him if he was going to punish me for being so naughty with him, he thought it was a good idea to challenge me by offering to test his limits.

Surprised by his answer, which I had not imagined at all myself, I waited for his confirmation before throwing the first shot, timidly on his chest. A small satisfied smile on his face, and the second, brighter blow comes to slap again on his skin.


As the next blows fell on his chest, abdominals, thighs, the tension and excitement increased in each of us. Both of us knew that this frustration would then turn into an epic fuck. To finalize this ordeal, I definitively remove his blindfold and leave him tied.

After coming to his senses, he discovers me in front of him, swift in hand. My mischievous smile and naked body don't seem to leave him marbled... I face his gaze and assume to the end by giving him a few last blows of the swift. "I want to be sure you'll fuck me right." I put these few words in his ear, move away from him and sit on the bed, right in front of him, legs spread so that he can fully enjoy the view.

My hands wander between my sex and my chest, already more excited than ever, the pleasure I get is only due to the desire I see in her eyes. He stares at me intensely, follows my hands and seems to be living my pleasure at the same time as me. On the verge of orgasm, I deprive myself once again to reserve this pleasure for him. I get closer to him, make him promise not to move until I give him the order, and release him from his bonds. I know by observing him languishing one last time, that the tension that has been building in him for too long will soon fall on me. I then settled down again on the bed but this time on all fours, buttocks stretched towards him.

I then turn my face in its direction, I feel it is ready to jump on me, "it's okay you can come". The size of his smile and the speed with which he joined me was only a brief glimpse of the intensity of his upcoming hip strokes. On his side, back, stomach, between his kisses, his caresses and the spankings that broke out on my ass, I confess I don't really know in which order he then took advantage of my body.


Submissive to the possible, I took my role back and let him fuck me as he pleases while I enjoy each of his hip strokes deep inside me. On his back, legs raised in front of him, his tail never ceased to give me pleasure. His gaze following mine, his breath panting according to my moans, his whole body was determined to make me come.

Not surprisingly, my Apollo led me to orgasm, THE TRUE! This moment, although impossible to describe, provoked in me a feeling of liberating fullness! Being of a very anxious nature, this sudden appeasement, this complete well-being, is very rare (or even usually non-existent) for me. This tidal wave of emotions and intense sensations finally got the better of me, and without me controlling anything, a few tears of happiness escaped me.


I myself was surprised by my reaction, that of my Apollo, more than ever proud of him (and us), and reinforced me in the astonishing experience we had just lived."

Moral of the story: Breaking the barriers we set for ourselves can lead to orgasm.

A lesson that we will certainly learn!)