3 positions for a clitoral orgasm 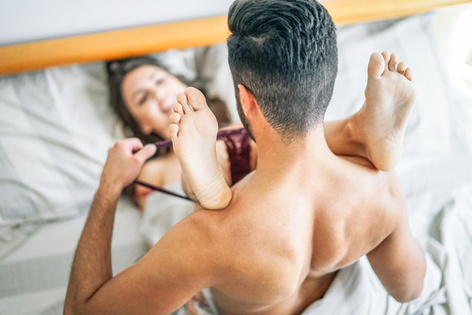 Some of the Kamasutra positions stimulate the clitoris. Lebisou has selected for you the 3 best positions to promote a clitoral orgasm.

Position of the Andromache

In this position of the Andromache, the woman is sitting astride the man. She has one leg on each side.

In this position, the clitoris is stimulated by frictions . In addition, Andromache allows women to control their movements to get more pleasure.

The padlock position can be done on a worktop, table, washing machine or any other solid furniture. The woman sits at the edge of the cabinet and stands with her arms. The man stands in front of the woman while she wraps her around with her legs .

Sir guides only the movement. This position of the padlock also promotes friction on the clitoris , as well as the game of looks and caresses. Mister can accentuate the feminine pleasure while stroking during the sexual act the pink button of Madam.

The missionary is the most classic and well-known sexual position in France!

This position is very comfortable and, in addition, it promotes clitoral orgasm by bringing the bodies of both spouses together.

The woman can also wrap the man's body with her legs as in the padlock position to allow deeper penetration . It is the man who guides the movements in the missionary position, while the woman has the free hands to caress the back and buttocks of her partner. She can also play herself with her clit to reach orgasm faster.